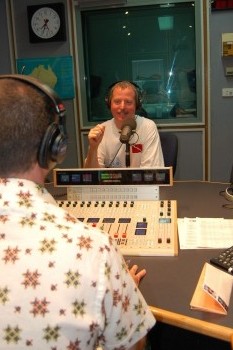 ScubaRadio is radio talk show with a diving theme. Pictures are painted of the underwater world as listeners and guests share their diving adventures.

Every diver has a story about the perfect dive, destination, or encounter with some amazing sea creature. ScubaRadio provides the forum. It's like hanging out at a Tiki hut and sharing fish tales with friends.

The presentation is light hearted and entertaining as to not alienate non-divers from joining our little on-air dive club. Listeners have compared hearing ScubaRadio to watching “Shark Week” on the Discovery Channel. It's compelling entertainment whether you're a diver or not.

What do we talk about?

ScubaRadio covers all aspects of diving, including the best dive sites, dive gear, live-aboards, shark diving, and much more.

Each week you'll hear interesting people known throughout the dive industry, such as Jean-Michel Cousteau or Captain Slate, a Key Largo-based character who has a knack for feeding fish with his face!

We lean on a wealth of information provided by guests, sponsors, and callers to entertain and inform ScubaRadio listeners. Plus we give away more stuff than just about any other show on the radio…from CD-ROMs and dive gear to free scuba lessons and exotic dive vacations!

How did we come up with the idea?

While programming a sportsradio station in Orlando, Diver Dick and Greg The Divemaster had a conversation about one of the perks of their managerial positions….free golf! Unfortunately, Greg doesn't golf and said, “wouldn't it be nice if we could dive free instead?” Dick looked to Greg and said, “let's do a dive show!” So ScubaRadio was literally started as an excuse for Greg and Dick to go diving on company time.

Shortly thereafter, the DEMA (Diving Equipment and Marketing Association) trade show took place in Orlando. They attended the event and discussed their idea with exhibitors. The response was extremely positive. Many felt this would be a unique new way to promote the sport and encourage current divers to stay active. After realizing that ScubaRadio could do more than just get them a few free dives, Greg and Dick adopted this noble concept as their mission statement. They also discovered that no one had ever attempted a radio show of this type before. Hence, ScubaRadio…the world's first radio show devoted to diving, was born.

How long has ScubaRadio been around?

ScubaRadio began airing on the last Saturday in March of 1997. (the anniversary is celebrated every April Fools day) Dick and Greg had over 30 years of radio experience at the time and knew they had the skills to pull it off. However, they really didn't know how listeners would respond. The answer came quickly as the positive reviews poured in from all over Central Florida. They had definitely tapped into something special and ScubaRadio was taking on a life of its own.

Within a couple weeks, Skin Diver magazine, DAN, and PADI signed on as official sponsors of ScubaRadio. Their passion for diving (and hope of getting a few free dives) had transformed an hour on Saturday mornings into the one of the most profitable hours on the entire radio station.

To say Greg and Dick were pleasantly surprised would be an understatement. They were 30 days into a new radio show and sold out on advertising! No free dives yet, but they were making contact with some truly unique characters within the dive industry, the same people Dick and Greg had read about in the dive magazines for years.

While ScubaRadio's first focus was fun, Greg and Dick felt a responsibility to make the show a successful promotional vehicle for the dive industry as well. Besides, what could be more fulfilling than turning people on to this wonderful activity.

After a few months, they began approaching their radio station management about doing broadcasts from a various diving events/destinations. Unfortunately, the management wasn't very enthusiastic about giving them the flexibility to accomplish these goals. 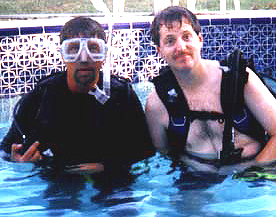 After a year and a half, changes were made at the radio station that left Greg the option to produce ScubaRadio full time or be re-assigned within the company. He decided to take ownership of the show and quickly began syndicating ScubaRadio to other stations throughout Florida. In about a year, 8 Florida radio stations were airing ScubaRadio. Radio networks were beginning to take notice and shortly thereafter, ScubaRadio was added to a weekend line-up of lifestyle programming available on the Business Talk Radio network. This meant clearance on about 25 radio stations throughout the country!

Things had been going very well and then lighting struck in February of 2000 when Diver Dick was diagnosed with a rare form of stomach Cancer. He passed away on October 9th, 2000. Obviously, this was a major blow to the show and the future of ScubaRadio was uncertain. However, Greg persevered knowing the friend he had lost wanted ScubaRadio to continue. Greg credits the amazing support he received from listeners for getting through a very difficult time and making ScubaRadio the success it has become today.

Where are we now?

Every week thousands of listeners are tuning into ScubaRadio via radio stations scattered throughout the US. Our syndication is handled through Radio America.

We also cybercast worldwide over the Internet at www.ScubaRadio.com. You can listen live or to archives of past editions of ScubaRadio. Never miss a show by subscribing to free podcast on Itunes!

We also produce “World of Boating” and “Just Plane Radio.” These are the 1st and only nationally syndicated radio shows devoted to boating and aviation! (Sound familiar?) This allows us to provide our sponsors 3 targeted markets with one economical advertising buy. Plus we cross promote diving, boating and flying between all three shows to create a unique outreach opportunity for each activity/industry. Please contact us for sponsorship opportunities.